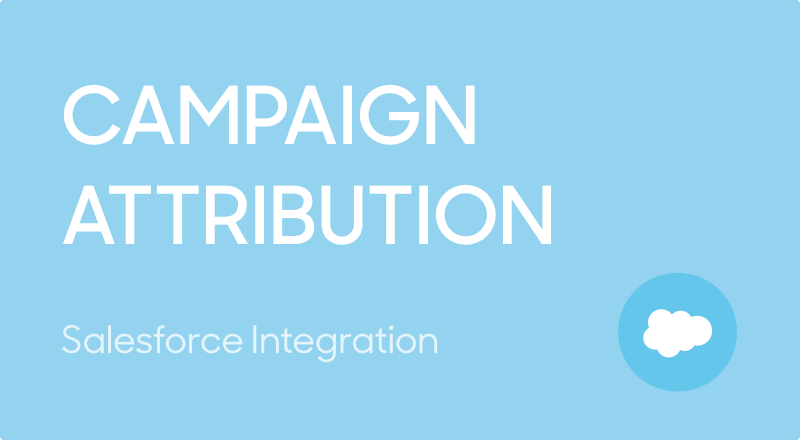 Salesforce Campaign Attribution is one of the best ways to assess the ROI of your marketing efforts and the channels you’re using to connect to Leads, Contacts, and Prospects.

What if you’re using Pardot? No problem. Pardot allows you to also track attribution using their Source Campaign field or what we recommend, using Connected Campaigns with Salesforce. We’ll also cover Pardot attribution in this guide as well.

Before we dig into Campaign Attribution, you’ll want to become familiar with the basic concept of Salesforce Campaigns.

If you're not familiar with Salesforce Campaigns, they’re an object within Salesforce that  help track marketing initiatives in detail. For example, your outbound emails, marketing events, advertisements, or conversational marketing strategies.

Within your Salesforce Campaigns you'll have Campaign Members. Campaign Members are those Leads or Contacts that you're trying to market to within that Campaign. For example, the people in your email distribution list or the visitors on your website who have had a conversation with your chat bot or live chat. There are different “Campaign Member Statuses” that you may assign to each campaign member (e.g. Sent or Responded), but we will not be referencing that value for Qualified’s recommended reporting.

For example, let’s say Jane Smith is on your marketing email list and you’re sending out an email campaign that features your newest product. Jane receives your email, clicks on the CTA inside the email, and is now on your website. Jane Smith continues to browse your product page and finally clicks on your Qualified chat bot and interacts with your sales rep to ask a few more questions before she books a meeting to get a live demo later that week.

A meeting was booked, awesome! But, if you’re not using Campaign Attribution, you might not be able to see which Campaign played a part in Jane’s decision to purchase from you later on, or prompted her to book the demo. This is why Campaign Attribution is so important, to help you answer those questions and continue to invest your marketing efforts wisely.

Campaign Attribution and Qualified: How It Works

Now that you understand how Campaigns, Campaign Members, and Campaign Attribution work let’s take a closer look at how it all works specifically within Qualified.

As visitors come to your site and have conversations with your chat bot or with your sales reps, those visitors will be pushed into Salesforce or Pardot and associated with the Campaign you've designated in your Lead or Contact mappings.

A conversation in Qualified is defined as a simple back-and-forth interaction between a visitor and a chatbot or sales rep.

We’ll break down different scenarios below to show you what happens behind the scenes with your known and unknown visitors and Campaign Attribution.

When a new Lead enters your site and has a conversation within your Qualified chat box (or with a sales person) we will add Campaign Attribution as soon as the Lead is created. A Lead can be created two ways:

Campaign Attribution will be determined by the settings that you’ve set in your Qualified.com Lead mapping.

You’ll want to keep in mind that in order for Campaign Attribution to happen automatically for your known Leads and Contacts you’ll need to set this up in your Contact and Lead mappings. We’ll show you how to do that in detail in the next guide.

Now, let’s say someone who is not a Prospect in Pardot comes into your site and has a conversation within your Qualified.com app. At this point we’ll go ahead and update your Source Campaign automatically in Pardot as soon as the Prospect is created. A Prospect can be created in two different ways:

When a known Pardot Prospect comes to your website and has a conversation with your Qualified chat bot or with one of your sales representatives, we won’t automatically override your Pardot Source Campaign. We understand that most likely your known Prospects already have a Source Campaign attributed to them. However,  if you’d like to override that Source Campaign at any time, you can do so just by setting this up in your Pardot sync push node in the Experience Builder.

Remember Jane from earlier? Let’s assume she was a Prospect in Pardot and clicked on a link in your email Campaign, which led her to your site and interaction with your sales team using the Qualified app. Since Jane was already a Prospect, we won’t override her Source Campaign field, but if she’s been synced to Salesforce as a Lead we’ll associate her with your Qualified.com Campaign in Salesforce.

If you are using Connected Campaigns with Pardot you’ll notice that changes made to your Pardot Source Campaign will also be reflected in Salesforce.

Your Source Campaign will not be updated in Pardot after it has been set by Qualified or an outside source unless you specifically request this in your Pardot push node. However, we will continue to associate your Leads and Contacts in Salesforce to Campaigns. What this means is that your Prospects will only have one Source Campaign but the Lead in Salesforce could have multiple Campaign associations.

To continue your Qualified.com education, check out the guides below: