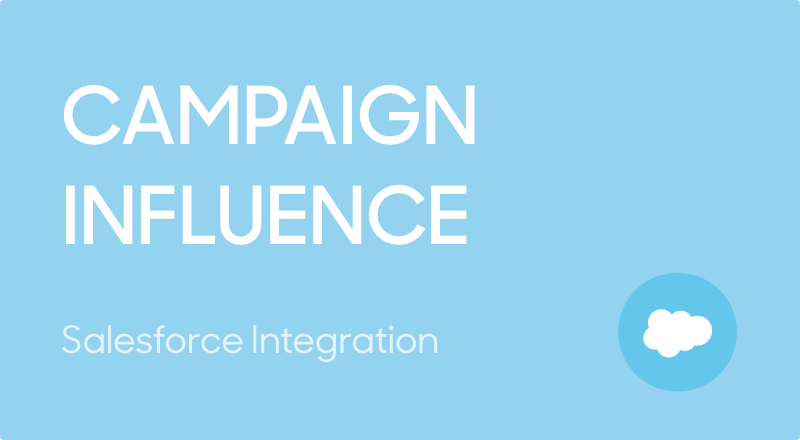 In this guide, we'll go over why Campaign Influence is so important and how to set it up in Salesforce to be used to track your Qualified.com campaign.

Setting up Campaign Influence in Salesforce

Before setting up Campaign Influence, you’ll want to have a good understanding of Campaign Attribution and have your Campaigns set up in Salesforce and Qualified.

As a prerequisite to using Campaign Influence you’ll also want to be using these Salesforce objects to track your marketing efforts and opportunities within Salesforce:

To get started, we’ll first need to start by configuring Campaign Influence in Salesforce if it’s not done already.

‍
If you use Pardot, you’ll want to make sure to first turn on Connected Campaigns to enable you to report on Pardot campaigns within Salesforce.

Campaign Influence 1.0 is an out of the box solution that gives 100% of the credit to the campaign first associated with an opportunity. It allows for you to auto-associate your campaigns to Opportunities and is quite easy to set up.

Custom Campaign Influence will allow for you to split the revenue of your Opportunity and weigh each marketing campaign against that revenue depending on the level of influence each campaign has.

For example, let’s say you choose to enable Custom Campaign Influence. You might have a few campaigns going on at one time: email, campaign, marketing events, and sponsored dinners where you get one on one time with your prospects. You wouldn’t necessarily want your email campaigns to have the same weight as your sponsored dinner. Campaign Influence custom models allow for you to calculate those campaigns differently rather than having them all equally balanced.

Once you’ve enabled Campaign Influence 1.0 you’ll then want to set up your Auto-Association settings. This is where you can define a number of days for a time frame, or other filtering criteria that must be met before a campaign can be auto-associated to an opportunity. You might also choose to leave this blank so that all campaigns will be automatically associated with your opportunities.

When finished you’ll see that out of the box 100% of the credit goes to the campaign first associated with an opportunity.

Within Custom Campaign Influence you can choose from 3 different models to use. Saleforce Ben explains them as:

With Customizable Campaign Influence, you can define the weightings for the first-touch campaign, last-touch, or stick to an even distribution model (where all campaigns have equal % Influence, and therefore Revenue Share).

You can use any of these models that you’d like, or all of them together. However, you’ll want to keep in mind that Salesforce uses two date fields in particular to determine first and last touch for all models listed above.

First touch: Salesforce will look at when the Campaign Member was created to decide which campaign was a contact’s first touch with your business.
Last touch: Salesforce will look at the Campaign Members last modified date to decide which campaign the contact interacted with before the Opportunity closed won.